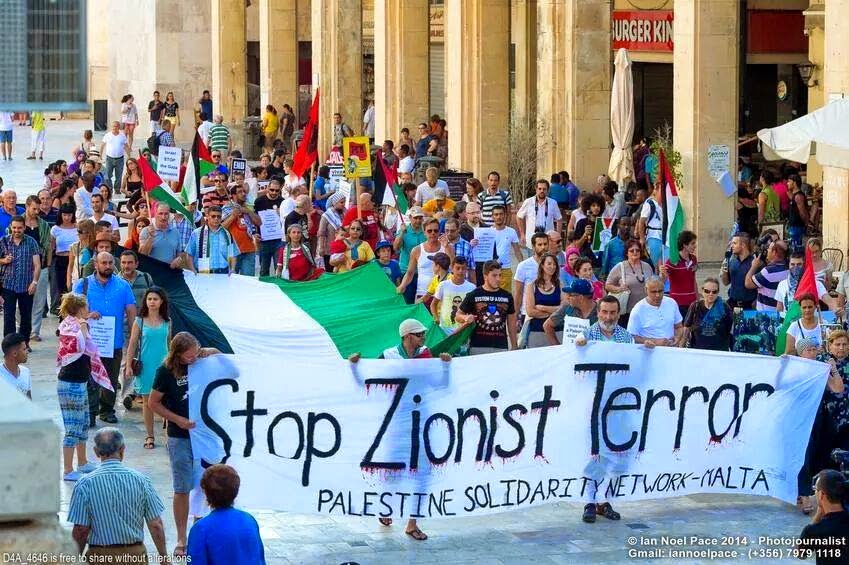 The Palestine Solidarity Network – Malta held a Walk for Gaza in Valletta to condemn the latest brutal Israeli aggression against the population of Gaza and call for a free Palestine. It is also reiterating its stand against any support the Maltese Government might give to Israel’s bid for a seat on the UN Security Council.

During this aggression 200 people, including children and whole families have already been murdered, hundreds were injured and Gaza’s infrastructure is once again being demolished under Israeli bombardments. On the other hand, the few rockets thrown from Gaza into Israel as a reaction to the murder of 7 Palestinians living in a Gaza refugee camp by the Israel army have resulted in only one casualty on the Israeli side. Thus, contrary to many media portrayals, what is happening in Gaza is not a war but a vicious aggression by the Israeli state.

The Gaza strip is a land the size of Malta and 1.8 million people live there, most of them Palestinian refugees who in 1948 fled Zionist militias that were ethnically cleansing Palestinian land from Palestinian people. This attack is therefore a continuation of decades of oppression, racial discrimination and ethnic cleansing of Palestinians by Israel. The population of Gaza has been living under constant Israeli siege for the past eight years and has already suffered two massacres, in 2009 and 2012, where more than 1,500 persons were killed.

Thus, what is happening right now did not start a week ago, when Israel began its military operation against the population of Gaza. It is systematic violence by Israel against the Palestinians which has been going on for the past 66 years, with Palestinians having been disposed from most of their homes and lands in the process. For all these reasons, should the Maltese government support Israel’s bid for a seat in the UN Security Council, it would be committing a terrible mistake. Israel repeated disregard of UN resolutions and its continuous acts of terror towards the Palestinian population, make it completely unfit to have such a seat.

Moreover, we call onto the Malta government to take a clear stand against Israeli aggression and not simply condemn ‘violence’ in the Middle East, since this is clearly a case of Israel being the oppressor and Palestinians those being oppressed.

The Palestine Solidarity Network – Malta is a group of organisations and individuals active against the systematic oppression and dispossession of the Palestinian population. It includes the following organisations: Moviment Graffitti, Third World Group, Koperattiva Kummerc Gust, Integra Foundation, Zminijietna – Voice of the Left, Arab Maltese Community, Partit Komunista Malti, Arabic Culture Information Society and Garden of Knowledge
Posted by Zminijietna Voice of the Left at 06:21